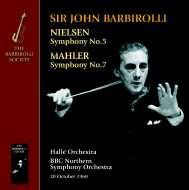 The Barbirolli Society’s latest release isa 2-CD set of the complete concert given in the Free TradeHall, Manchester on 20October 1960,with the combined forces of theHallé and BBC Northern SymphonyOrchestras. The concert consisted of Nielsen’s Symphony No.5 and Mahler’s Symphony No.7.

Michael Kennedy, writing in 2000, stated: ‘Performances of the (Mahler) Seventh were much rarer then than they are today, and Mahlerian scholars and enthusiasts flocked to Manchester for the event, among them Deryck Cooke who was profoundly impressed by Sir John’s ability to make the work’s structure cohere. This was an especially significant comment coming from Cooke, who harboured many doubts about the symphony and confessed to finding it most ‘problematical’.’

Some ‘truly remarkable music-making’, as critic Rob Cowan puts it in Replay.