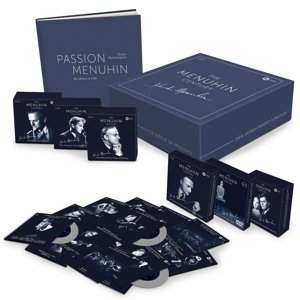 Green, P: Romance on a Theme of Paganini (from the film The Magic Bow)

Paganini: Caprice for solo violin, Op. 1 No. 5 in A minor

Handel: Aria, from Dettinger Te Deum for violin and piano

Fauré: Andante in B flat for Violin and Piano Op. 75

Boieldieu: Sonata for violin and harp in E flat

Rimsky Korsakov: Song of the Bride (from The Tsar's Bride)

Kreisler: Sicilienne and Rigaudon (in the style of Francoeur)

Paganini: Caprice for solo violin, Op. 1 No. 6 in G minor

Pizzetti: Sonata No. 1 in A major for violin and piano

Paganini: Caprice for solo violin, Op. 1 No. 6 in G minor

Kern: Pick Yourself Up

McHugh: I can't believe that you're in love with me

Rodgers, R: Lady is a Tramp (from Babes in Arms)

Harris, Max: Air on a Shoestring

Tippett: Fantasia Concertante on a Theme of Corelli

Katherine talks to the great French documentary-maker about his relationship with Yehudi Menuhin.

A lavish collectors’ edition, presented in a cloth-bound box: the same premium-quality design that has given the Maria Callas Remastered Edition pride of place on the shelf.

Comprising a total of 80 CDs, divided into five themed boxes, 11 DVDs and a hardback book, The Menuhin Century draws on the unequalled 70-year relationship between the violinist and the record company HMV/EMI. That collaboration produced a total of some 300 discs, which are now part of Warner Classics’ unrivalled catalogue. While The Menuhin Century is impressively extensive, spanning the 53 years from 1929 to 1998, it does not aim for completeness; rather, its particular focus is on the violinist’s landmark interpretations and on recordings never before released, or appearing for the first time on CD. About a third of the CDs in The Menuhin Century comprise rare or unreleased recordings, so the set offers a thrilling voyage of discovery both to Menuhin aficionados and to music-lovers who might be experiencing his art for the first time.

The Menuhin Century has been compiled in close collaboration with Bruno Monsaingeon, a film-maker who has also been a professional violinist; he knew Menuhin well for many years, and directed several of the documentaries that appear on the DVDs in the set. Monsaingeon is also the author of the eloquent and insightful text of the lavishly illustrated hardback book, running to over 250 pages, which complements the CDs and DVDs.