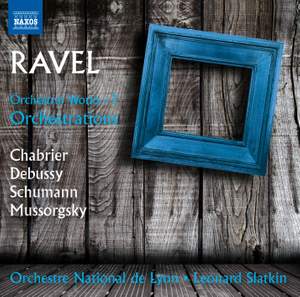 A mixed bag overall, but the Schumann is a rarity and worth having. — MusicWeb International, 1st July 2016

V. Ballet of the Unhatched Chicks

Excerpt,  Mussorgsky: Pictures at an Exhibition

Pictures at an Exhibition: Promenade (arr. L. Slatkin for orchestra)

VII. The Market Place at Limoges

Maurice Ravel’s incomparable skill in orchestration and command of orchestral colour is evident both in his own works and in his orchestrations of music by other composers. His versions of both Chabrier’s vibrant Menuet pompeux and the colourful commedia dell’arte figures of Schumann’s Carnaval were commissions for ballet, while new life was given to his late friend Debussy’s Sarabande et Danse at the request of publisher Jean Jobert. Ravel’s iconic orchestration of Mussorgsky’s Pictures at an Exhibition makes telling use of a large orchestra, vividly depicting scenes that range from the playful to the macabre.

A mixed bag overall, but the Schumann is a rarity and worth having.