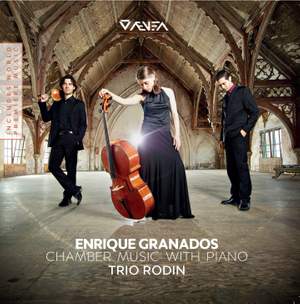 Trio Rodin's debut recording presents a new version of the Granados piano trio Op. 50 based on the manuscript found at the "Museu de la Música de Barcelona" instead of the more commonly played Edition UMe. The CD also includes the world first recording of Granados Trova along with an arrangement by the composer himself of his most famous chamber orchestra piece Elisenda.

The sonata for violin and piano is another of the great surprises this CD has to offer. "We knew about the existence of the valued manuscripts of second, third and fourth movements of this well known 'one movement' sonata; but no one has dusted them off and shown them to an audience till now. A complete second movement and two other unfinished movements are presented here as a premiere of what it is without any doubt one of his greatest chamber music works." (Trio Rodin)