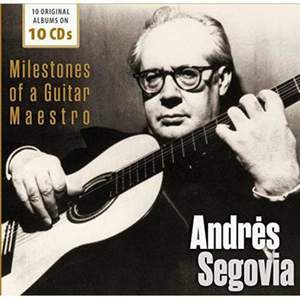 Mendelssohn: Song without Words, Op. 19b No. 6 in G minor 'Venetianisches Gondellied'

Ponce, M: Andantino variato on a theme by Paganini

Villa-Lobos: Prelude No. 1 in E minor

Ponce, M: Prelude for Guitar and Harpsichord in E major

10 CD box set celebrating one of the great virtuosos of the 20th century,

The master guitarist shows the complete range of his skill across ten original albums recorded between 1949 and 1962. Numerous compositions which now belong to the classical guitar repertoire were originally written for Segovia, among them works by Manuel Ponce, Federico Moreno Torroba, Joaquín Rodrigo, Fernando Sor, Joaquin Turina and Mario Castelnuovo-Tedesco. These and other pieces, for instance by Grieg, Schubert, Rameau, Franck, Schumann and Chopin, can be heard in this collection.

No other guitarist changed the image of this instrument as much as Andrés Segovia. His influence on the development and importance of classical guitar playing in the 20th century was immense. Through his perfect technique and style Segovia set new standards in the modern art of guitar playing. At the same time he was instrumental in widening and increasing the quality of its repertoire. He arranged music from the Baroque and Classical epochs and his colossal series of transcriptions and editions laid the foundations for the renaissance of the guitar in the 20th century. His Bach arrangements amounted to a musical revelation not only for admirers of that great Baroque master's music.