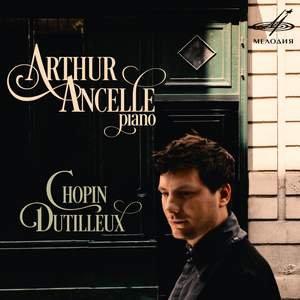 Recorded in Moscow, at the First Studio of State House of broadcasting and recording May 26–29, 2015

I. In shadow and silence

II. On one chord

III. The game of opposites

Arthur Ancelle is a prize winner of many international competitions in France, Russia, Bulgaria, Italy, Spain and Australia, the pianist has played at famous venues such as Carnegie Hall, Wigmore Hall, Salle Cortot and Salle Gaveau in Paris, the Philharmonic Halls of St. Petersburg and Moscow. The pianist has several special awards for the performance of contemporary composer’s works. He is particularly known as a propagandist of contemporary French music.

According to the pianist, the composers featured on the album are not an accidental choice. It may seem, at first glance, that they have nothing in common. However, there is a great deal of cultural links between them.

Chopin’s Four Ballades on the album are individual interpretations of the performer who seeks to demonstrate his vision of Chopin’s music. Dutilleux’s pieces – Sonata for piano and Three Preludes – capture the inimitable style of the contemporary French composer. Bright colours, purity and freshness of the musical language, energy, impulse, love and poetry are the key features of the works played by Arthur Ancelle.

Jean-Martial Golaz, a renowned sound engineer who has collaborated with famous labels took part in the making of the album.

Ancelle offers refinement in regard to voicing chords or highlighting bass-lines and harmonic felicities…the taut, line-oriented pianism throughout Ancelle’s Chopin Ballads purges decades’ worth of expressive clichés from these over-recorded scores