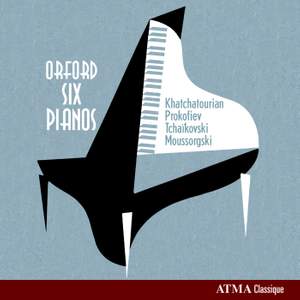 "Anything rhythmic works well with this lineup — Russian music and symphonic pieces are perfect for pianos," says ensemble member Mariane Patenaude. For this album, Olivier Godin, Francis Perron, and Louis Dominique Roy have transcribed works by Prokofiev, Tchaikovsky, and Khachaturian, adapting them for piano sextet.