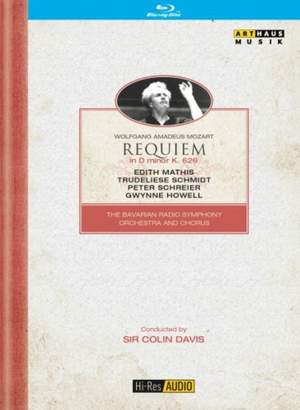 Mozart‘s last work, the Requiem Mass in D minor K626, receives a strong performance from the Bavarian Radio Symphony Orchestra and Chorus under Mozart specialist Colin Davis in a classic recording made in 1984. It features the outstanding Peter Schreier and Edith Mathis as well as ever-popular Welsh bass Gwynne Howell and mezzo-soprano Trudeliese Schmidt as the soloists.

Popular legend has it that the Requiem was commissioned by a mysterious stranger, fuelling Mozart‘s obsession that the piece was his own Mass. However the probable truth is much less dark, that one Count Walsegg, who had a well-known penchant for commissioning works which he attempted to pass off as his own, commissioned it upon the death of his wife. Mozart died in 1791, before fi nishing his work. It was later completed by one of his students, Franz Süssmayr, at the request of Mozart‘s wife Constanze.