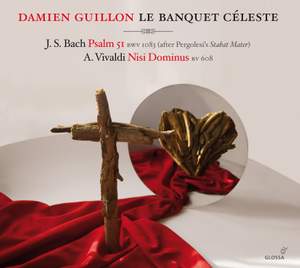 this is a profoundly thoughtful new interpretation by countertenor Damien Guillon, who directs his own ensemble Le Banquet Céleste and is joined by soprano Céline Scheen. The hallmarks of their... — Gramophone Magazine, March 2016 More…

Damien Guillon, who has been proving himself as an interpreter of the more spiritual side of Baroque music, now makes his debut on Glossa both as countertenor soloist and director.

In a fascinating pairing of Bach and Vivaldi psalm settings, 'Tilge, Höchster, meine Sünden' and 'Nisi Dominus', Guillon directs his ensemble Le Banquet Céleste, with which he recently made his debut in Avignon, conducting 'Acis and Galatea'.

Whilst he was Konzertmeister in Weimar, Bach was entrusted with transcribing scores by Vivaldi brought back from Amsterdam, thereby a fascination ensued, especially with Vivaldi's concertos.

As is pointed out by Stefano Russomanno in his booklet essay, Vivaldi would have employed the concerto logic also in his sacred vocal works, such as the early 'Nisi Dominus' recorded here. It was however a Neapolitan composer from the next generation, GB Pergolesi, whose music Bach turned to as the basis for a setting of Psalm 51, 'Tilge, Höchster, meine Sünden'. The result was a magisterially rendered reworking – in parody form – of Pergolesi’s theatrical (and catholic) Stabat Mater, adjusted by Bach to accommodate the different demands of the German Protestant text. The warmth of Guillon’s countertenor finds an ideal match in the soprano Céline Scheen, another fabulous singer of Baroque music, whose vocal agility and purity has been entrancing audiences across Europe.

this is a profoundly thoughtful new interpretation by countertenor Damien Guillon, who directs his own ensemble Le Banquet Céleste and is joined by soprano Céline Scheen. The hallmarks of their compassionate performance are relaxed, natural singing and astute, sophisticated playing

This is an exceptional recording of J.S. Bach and Vivaldi. Undoubtedly one of the finest releases of sacred baroque music I have heard for some time.