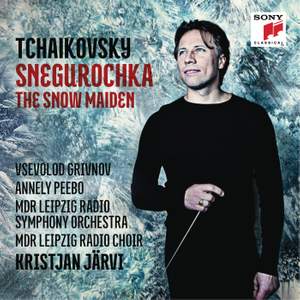 A lively and engaging performance — BBC Music Magazine, June 2016, 4 out of 5 stars More…

No. 2, Dance and Chorus of the Birds

No. 3, Monologue of the Frost

No. 9, Chant of the Blind Bards

No. 11, Chorus of the People and the Courtiers

No. 12, Round of the Young Maidens

No. 16, Appearance of the Forest Spirit and Aparition of the False Snow Maiden

No. 17b, Declamation of the Fairy of Spring

No. 18, Tsar Berendey's March and Chorus

Tchaikovsky’s incidental music to the play “The Snow Maiden” by Alexander Ostrovsky is undoubtedly his principal contribution to this genre. The composer and the poet were jointly commissioned to write the piece by the famous Bolshoi Theatre in Moscow, which led to a close and very productive cooperation. In fact, Tchaikovsky completed the lavishly scored work within a matter of only three weeks. At the heart of the play is a popular Russian folk tale with a familiar fairytale motif: a mythical creature longs for a human soul and for the ability to feel love but is tragically destroyed by the irreconcilable differences between the human world and its mythical counterpart. Kristjan Järvi has been the principal conductor of the MDR Radio Symphony Orchestra since the 2012 season. He is a unique musical personality pushing the classical music borders with new ideas, his charisma and extraordinary technical prowess. He has been hailed by The New York Times as "a kinetic force on the podium, like Leonard Bernstein reborn." Järvi combines his classical music origins and his love for traditional repertoire with a powerful passion for original concert programs, that catapults concert halls and audiences around the world into the 21st century. Järvi has more than 30 albums to his credit and has received various awards, including the Swedish Grammy for Best Opera Performance, the German Record Critics Prize for Best Album and is a Grammy nominee.

A lively and engaging performance

Kristjan Järvi's account is excellent. There is a welcome warmth to the MDR Leipzig strings, recorded in concert. He is generally a smidgen faster than Järvi Snr in most numbers. Highlights include an exhilarating 'Dance of the Tumblers', every bit as brilliant as Rimsky-Korsakov's...Sony's bright recording captures the sunshine in the score.

Jarvi’s orchestra is lusty, rather than polished, but the singers give fruity solos.