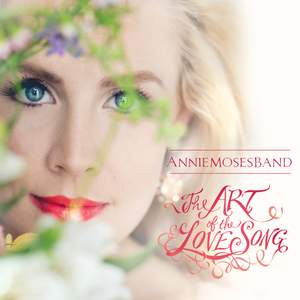 The Art of the Love Song: Annie Moses Band

MacColl: The First Time Ever I Saw Your Face

Al Dubin, Harry Warren: Warren & Dubin: I Only Have Eyes For You

McLean, D: And I Love You So

Lennon, J: Grow Old With Me

Billy Preston, Joe Fisher: Preston & Fisher: You Are So Beautiful

Young, V: When I Fall In Love

The six multi-talented brothers and sisters who make up the Annie Moses Band are on home ground for The Art of the Love Song, the lush, romantic album that follows their first Warner Classics release, American Rhapsody. Available as a CD, DVD or Blu-ray, it was recorded live in July 2015 at the legendary Grand Ole Opry House in their hometown of Nashville, Tennessee.

Nashville, officially designated the USA’s ‘Music City’, reigns supreme in country music, but the Annie Moses Band specialises in a particular brand of artistic fusion. They bring together a rich variety of musical styles – popular and classical – to create something fresh, distinctive and captivating.

In the words of the band’s sweet-voiced lead singer and violinist, Annie Wolaver Dupre, The Art of the Love Song “honours the miracle of love”. She quotes Nat King Cole’s haunting Nature Boy: “The greatest thing you'll ever learn, is just to love and be loved in return." The velvet-voiced Cole is a special point of reference on the album, which also offers romantic numbers made famous by a diverse collection of great names – among them Barbra Streisand, The Beatles, Art Garfunkel, Joe Cocker and Perry Como. The members of the Annie Moses Band have reinterpreted a whole treasury of classic love songs for the album: it has 14 tracks, with two bonus tracks on the CD, and a bonus track and interview footage on the DVD and Blu-ray.

Backing them on the stage of the Grand Ole Opry House last July was a full-scale symphony orchestra, comprising young musicians from around the world who had come to Nashville to participate in the annual Fine Arts Summer Academy. This two-week summer-school is led by the members of Annie Moses Band – with their mother, Robin, serving as Artistic Director, and their father, Bill, as Musical Director. The lavish sound of the orchestra provides the perfect setting for the instruments and voices of the younger Wolavers – and for the unforgettable words and music of some of the world’s most memorable love songs.