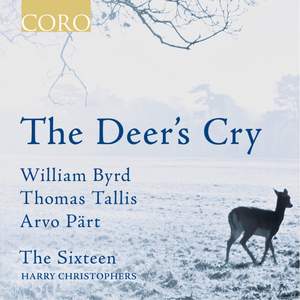 [The Deer's Cry] is a deceptively easy-looking piece on the page, but keeping its halting, minimalist ground-rhythm pulsing meaningfully, and building the slow-burn crescendo over several minutes... — BBC Music Magazine, April 2016, 4 out of 5 stars More…

[The Deer's Cry] is a deceptively easy-looking piece on the page, but keeping its halting, minimalist ground-rhythm pulsing meaningfully, and building the slow-burn crescendo over several minutes requires advanced levels of technical proficiency. That, of course, is what The Sixteen majors in, and its performance combines a scrupulous accuracy with a pregnant sense of ritual and contemplative mystery

Those favouring sonic beauty above all else will find 'The Deer's Cry' an essential addition. Larger forces and fuller voices give The Sixteen a textural depth Stile Antico and The Tallis Scholars neither seek nor attain, thickening the sound without obscuring the architectural workings of these complex pieces of polyphony...it's hard to wish greater restraint of such glorious singing.

It’s fascinating to compare Tallis and Pärt’s different but complementary treatments of the Woman with the Alabaster Box parable. Music and singing of hypnotic beauty.

The Sixteen perform music of composers born four centuries apart, both persecuted for their religious faith...In each case their choral writing has a simplicity and intensity, perfectly suited to the blended sound of the Sixteen.