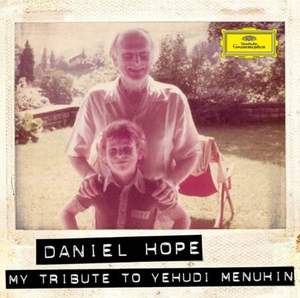 My Tribute to Yehudi Menuhin

such is Hope's exultant phrasing that it could almost be the Master himself playing. Indeed, part of the fascination of this carefully chosen programme, in which Reich, Tavener, Henze and Knumann... — BBC Music Magazine, May 2016, More…

Tavener: Song of the Angel

This year marks the 100th anniversary of violin legend Yehudi Menuhin, and Daniel Hope dedicates a complete album to his former mentor and close friend. After fleeing from the Apartheid regime in South Africa, and ending up in England, Hope’s mother was offered a job as a secretary to Menuhin, and later became his manager. Hope says Menuhin is the reason he became a violinist. This new album is a beautiful selection of works, mostly commissioned by/for Yehudi Menuhin including Takemitsu’s Nostalghia, Reich’s Duet for 2 Violins and String Orchestra and Henze’s Adagio. The Vivaldi Concerto RV 522 for 2 Violins was the piece Hope and Menuhin played together many times in the past.

such is Hope's exultant phrasing that it could almost be the Master himself playing. Indeed, part of the fascination of this carefully chosen programme, in which Reich, Tavener, Henze and Knumann rub shoulders with more traditional fare, is the way Menuhin's questing spirit has so clearly inspired Hope's own probing exploration of music of myriad genres and styles

this release, celebrating [Hope's] mentor's 100th anniversary, is nothing if not authentic. All the repertoire has a connection to Menuhin, embracing everything from Baroque to contemporary classical music. The result is a showcase for his versatility…not to mention Hope's…[who] is at his most magnetic in the world of folk, which spotlights his particular blend of fire and refinement

Hope has created a loving homage.