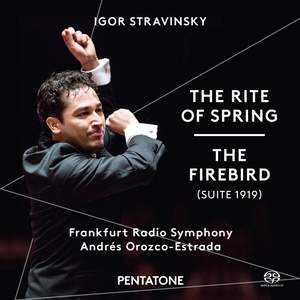 Stravinsky: The Rite of Spring & The Firebird (Suite 1919)

Those allergic to this score will find the decidedly Gallic results something of a revelation, the bejewelled textures of Ravel never far away. Those who think they've heard it all before should... — Gramophone Magazine, March 2016 More…

Part I: Adoration of the Earth: Introduction

Part I: Adoration of the Earth: The Augurs of Spring - Dances of the Young Girls

Part I: Adoration of the Earth: Ritual of Abduction

Part I: Adoration of the Earth: Spring Rounds

Part I: Adoration of the Earth: Ritual of the River Tribes

Part I: Adoration of the Earth: Procession of the Sage

Part II: The Sacrifice: Mystic Circles of the Young Girls

Part II: The Sacrifice: Glorification of the Chosen One

Part II: The Sacrifice: Evocation of the Ancestors

Part II: The Sacrifice: Ritual Action of the Ancestors

II. The Firebird and its Dance

III. Variation of the Firebird

IV. Ring dance of the Princesses

All Igor Stravinsky needed to establish his worldwide reputation were three ballet works, composed in Paris between 1910 and 1913: L’Oiseau de Feu, Petrushka and Le Sacre du Printemps. It was in this period that the impresario Serge Diaghilev brought his Ballets Russes to Paris and invited the very best dancers, painters, choreographers and composers to work with his ensemble. After Diaghilev heard Stravinsky’s Feu d’Artifice in St. Petersburg and immediately recognised the potential of the music for ballet purposes, he commissioned Stravinsky to write the L’Oiseau de Feu. Its premiere at the Paris Opera was an enormous success and marked the beginning of the spectacular collaboration between Stravinsky and Diaghilev’s Ballets Russes, which brought forth Petrushka and Le Sacre du Printemps.

This album combines the Le Sacre du Printemps (The Rite of Spring) and the 1919 L’Oiseau de Feu, (The Firebird Suite). The Frankfurt Radio Symphony (hr-infonieorchester), one of the first radio symphony orchestras in Germany, founded in 1929, is under the direction of its Chief Conductor, Andrés Orozco-Estrada. Born in Colombia and trained in Vienna, he is one of the most sought-after conductors of his generation, currently holding not only the position of Chief Conductor in Frankfurt, but also the position of Music Director of the Houston Symphony and Principal Guest Conductor with the London Philharmonic Orchestra.

Those allergic to this score will find the decidedly Gallic results something of a revelation, the bejewelled textures of Ravel never far away. Those who think they've heard it all before should think again.