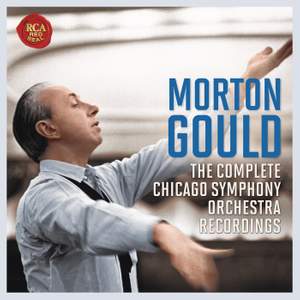 III. A Little Bit of Sin

No. 15, Final Waltz and Apotheosis

Waltz of the Swans

I. An Elegy to Our Forefathers

III. From Hanover Square North at the End of a Tragic Day, the Voice of the People again Arose

Between 1965 and 1968, the musical polymath Morton Gould conducted the Chicago Symphony Orchestra in a handful of recordings for RCA Victor. In and out of the catalogue for decades – mostly out – they have become the stuff of legend. Now, at last, Sony Classical brings them all together in a new 6-CD box, following up the series’ acclaimed complete collections of CSO recordings conducted by Fritz Reiner and Jean Martinon. New York City native Morton Gould (1913–1996) was a phenomenon: a Pulitzer Prize-winning composer, Grammy-winning conductor, prolific arranger and prodigious pianist who achieved equal renown in classical and popular music. He was barely out of his teens when his compositions were being conducted by the likes of Stokowski, Toscanini and Mitropoulos. He wrote for the concert hall, movies, radio, TV and the Broadway stage, as well as ballets for Balanchine, Agnes de Mille and Jerome Robbins. This new Sony Classical collection of Morton Gould’s Chicago recordings, features facsimile LP sleeves and labels, plus full discographical notes. Every recording in this next set has been remastered from the original analogue tapes.