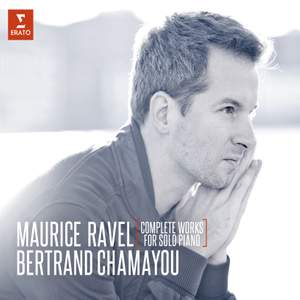 Steeped in the French piano tradition and with formidable facility, Bertrand Chamayou is certainly not tripped up by the finger-bending virtuosity of Miroirs or Gaspard, while conveying the cut-glass... — BBC Music Magazine, May 2016, 3 out of 5 stars More…

For his second release on Erato, Bertrand Chamayou is dedicating two CDs to the complete solo piano music of Ravel. “My style of playing and the way I imagine sound can be largely attributed to Ravel,” says Chamayou. “Recording his music is not just a return to my roots, but also a natural stage in my development.” This new set makes a fitting successor to Chamayou’s debut disc for the label: released in early 2014 and devoted to music by Schubert, it was praised by the Sunday Times as an “affecting, beautifully performed disc,” by Pianist magazine for “playing of intellectual conviction paired with a singing tone of heart-breaking beauty,” and by the Telegraph for “playing that radiates a generous Schubertian spirit, thoughtful in its shaping, structurally cohesive, absorbing in a spectrum of pianism that draws you into the music’s expressive heart.”

Schubert was one of the composers who inspired Ravel – notably in Valses nobles et sentimentales – as was Franz Liszt, whose transcriptions of Schubert songs were a feature of Chamayou’s debut album. His influence is evident in Ravel’s dauntingly virtuosic Gaspard de la nuit and glittering Jeux d'eau. The latter was the first ‘modern’ score that Chamayou saw as a child, and he began to play it at the age of eleven or twelve. The pianist even has a connection to the composer through one of his teachers at the Paris Conservatoire, Jean François Hessier; he was a student of Vlado Perlemuter who was mentored by Ravel himself. “I admire the purity and simplicity of Perlemuter’s approach, which seems in keeping with the famous – and probably exaggerated – statement attributed to the composer: ‘I don’t expect people to interpret me, just to play me.’”

In October 2015, Chamayou gave an all-Ravel recital at London’s Wigmore Hall. Seen and Heard International finished an enthusiastic review by saying: “Chamayou brought a perfect blend of high-voltage virtuosity and cultivated musicianship to this recital – superb stuff!”, while Music OMH awarded five stars to a concert that “justifiably brought members of the usually settled Wigmore Hall audience to their feet.”

Like Ravel, Chamayou was born in southern France, though in Toulouse rather than the coastal Basque country. As he told the journalist Vincent Agrech in an interview for the French magazine Diapason: “When I was growing up in Toulouse, I was fascinated by the music and the objective approach of northern culture. The Darmstadt School and Boulez, the ‘distanced’ mindset and playing of Glenn Gould … [Now] my playing, with its ideal of clarity and lightness, has gradually been enriched by a need for lyricism and colours which, somewhat clichéd though it might seem, evokes my southern roots.” Chamayou has since pointed out that “I recognise myself in Ravel’s mixture of rigour and hedonism … Beyond his rigour … there is a sense of freedom and a taste for sonic alchemy, for instance in the chromatic progressions of Valses nobles et sentimentales.”

Part of Ravel’s genius – particularly in a piano work like Le Tombeau de Couperin, written to commemorate friends killed in World War I – lies in his ability to touch the heart with music that has an apparently cool surface. While praising Chamayou’s Schubert disc, the reviewer on the German radio station Bayerische Rundfunk spoke of achieving a “balancing act between emotion and rigour, between fidelity to the score and the search for a distinctive inflection that can only come to life when the imagination of the interpreter runs free.” Those words could apply equally to Ravel. As Chamayou says: “The most difficult thing is to find one’s personal voice, which presupposes a certain liberty, when immersed in scores of such extraordinary precision. I have worked on them in the greatest detail …You have to polish and refine and adjust the lighting, but you should never underline anything. It all happens between the lines.”

Steeped in the French piano tradition and with formidable facility, Bertrand Chamayou is certainly not tripped up by the finger-bending virtuosity of Miroirs or Gaspard, while conveying the cut-glass elegance of Ravel’s nods to the past…an exceptional job.

Revelatory performances of breathtaking beauty and incomparable power. Most striking, perhaps, is their unforced naturalness...Everything flows with the inevitability of speech, precisely articulated, direct and unmistakably sincere...No one who loves French music or exquisite piano-playing will want to miss this.

These recordings of Ravel’s most important piano works are his first at the height of his powers...[in Gaspard] he summons an almost orchestral palette of colours, evoking the protean water nymph of Ondine in cascading arabesques and delicate, darting flourishes, while Le Gibet and Scarbo have rarely been imbued with so much mystery.

Chamayou has the right pedigree for Ravel: he studied with teachers at the Paris Conservatoire, whose lineage goes straight back to the composer, and it shows in the rock-solid technique and unfussy, unwavering interpretations he brings to this collection.

a warm, full tone, coloured (or not) where necessary, allied to intuitive rubato, control and real panache…Gaspard is a worthy successor to Michelangeli and Bavouzet, inspired and boldly individual