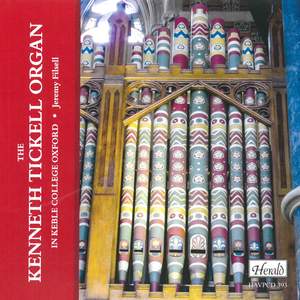 A note from the performer about this recording:

It is an honour to have recorded this, the first disc on Keble’s new Kenneth Tickell organ. Its building is the culmination of a long gestation period, one that, in fact, seemed destined to be short when I was an undergraduate some thirty years ago.

I am rarely an advocate of pot-pourri programming in either recital or on CD, but this current project naturally looks to expose the variety and versatility of the new instrument. As such, I have recorded music here that spans a geographical and stylistic gamut, notionally based on ideas of ‘fantasia’. Max Reger's red-blooded choral paraphrase on Hallelujah, Gott zu loben, arguably the finest of his choral fantasias, provides a canvas on which can be heard some of Tickell's seductive solo colours and, in the fugue, his commanding ensembles.

Percy Whitlock’s rather neglected Fantasie-Chorals rather happily sit between Franck’s and Reger’s essays in the form, yet they provide a quintessentially English style of expression in their sweep and harmonic flavour. Louis Vierne's Naïades conjures will-o'-the-wisp textures in which flutes and nazards are heard in capricious dialogue. Francis Pott has become an important voice in organ writing over the past thirty years, his lengthy and ambitious symphony for organ Christus (1990-1) having become one of the genuine pillars of late 20th-century repertoire for the instrument. He and I became friends during Oxford days and our collaborative partnership, both artistic and social, has been one of my lifelong blessings: championing his piano, organ and choral works has been a personal endeavour of great artistic reward.

Francis’s fantasy-like Empyrean takes me back to my own artistic roots, for as Francis's initial foray of substance within the organ canon, it was the first piece of his that I played. It was studied in the small hours, at Keble’s organ, during Hilary term 1983. It is thus included here for both nostalgic and artistic reasons.