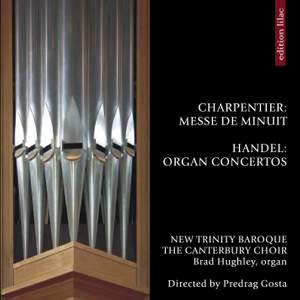 I. A tempo ordinario, e staccato

Two great baroque composers, Handel and Charpentier, are featured on thisnew recording in a performance by the Canterbury Choir and Atlanta's leading early music ensemble, New Trinity Baroque, directed by Predrag Gosta. New Trinity Baroque is recognized as one of USA’s leading baroque orchestras and early music ensembles. Founded in London in 1998, the group was initially established as an ensemble of international musicians. Led by the young conductor and harpsichordist, Predrag Gosta, the ensemble’s home base is Atlanta, USA. The members of the ensemble perform on period instruments, specializing in music of the 17th and 18th centuries. This release is the reprint of their album which was originally published in 2005.