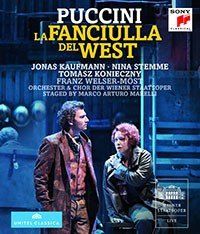 Stemme and Jonas Kaufmann succeed in making Johnson and Minnie’s last-chance-love thoroughly believable. Their singing is magnificent: supple, authoritative, sincere and tender, with due attention... — BBC Music Magazine, 5 out of 5 stars More…

A celebrated new production of Puccini’s La fanciulla del West from the Vienna State opera featuring Jonas Kaufmann and Nina Stemme. Staged by Marco Arturo Marelli, who sets it in a modern-day mining village, with the feel of a gritty modern drama, during the American gold rush of 1849. An unlikely setting for an Italian opera, but one that has a happy ending. It tells the tale of Minnie, the bartender in the saloon whom all the local men adore, and Dick Johnson alias Ramerrez, a notorious bandit. Dick and Minnie fall in love on first meeting, so much so that he vows to change his life as a bandit, sung by two contemporary great singers: Nina Stemme and Jonas Kaufmann. A new production from Marco Arturo Marelli brought one of Puccini’s rarely performed works to the Vienna State Opera stage in September 2013. Jonas Kaufmann in his role debut as the wanted and notorious bandit Ramerrez proves ideally cast, full of power, with his breathtakingly beautiful baritone timbre. "Nina Stemme and Jonas Kaufmann are the opera’s must-see couple for a generation… The rich playing of the Vienna orchestra under Franz Welser-Möst shows up the colour and detail of Puccini’s score to spectacular effect” Financial Times.

Stemme and Jonas Kaufmann succeed in making Johnson and Minnie’s last-chance-love thoroughly believable. Their singing is magnificent: supple, authoritative, sincere and tender, with due attention to the words...Welser-Möst balances narrative urgency and the hallucinatory languor of Minnie and Dick’s love music with playing of outstanding discipline, detail and brilliance from the orchestra.

The star couple are on top form...In the theatre Stemme sounded one size larger vocally than Kaufmann but the tenor's burnished tone and romantic magnetism come across impressively on disc. Tomasz Konieczny does well not to be upstaged as a searingly forceful Jack Rance...The combined strengths of this performance make Sony's DVD a clear first choice among recent releases.

[Kaufmann] Tall, dark and handsome, and invariably a skilful and apparently spontaneous actor who sings with imagination and comprehensive technical command, he will not disappoint his numerous fans. His distinctive voice never falters either in tonal beauty or richness of timbre, and he imbues both text (unusually clearly enunciated) and line with meaning. Franz Welser-Möst, the Staatsoper’s music director at the time of the production, supplies a fluent interpretation that combines an eye for the score’s detail with a sense of overall sweep; yet in the final analysis it’s Kaufmann that makes this release worth acquiring.