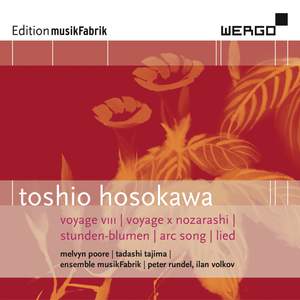 In these recordings…Hosokawa has the advantage of working with Musikfabrik, one of the very best specialist contemporary-music ensembles, and with recording teams sensitive to the delicate textural... — Gramophone Magazine, February 2016 More…

In hardly any other culture have the contrasts between East and West, between tradition and modernism been fought as intensively as in Japan. Few cultures have been more radical in breaking with the own roots after centuries of self-imposed isolation, in adapting to foreign customs, than the home country of the composer Toshio Hosokawa, who was born in Hiroshima in 1955 and who says about his own work: “As a composer, I wish to express something that we have already lost.”

For Zen monks, nature is an expression of the all-embracing Buddha nature which is, in essence, shapeless and inexpressible, yet which can, paradoxically, manifest itself only in visible forms. In the works 'Silent Flowers' and 'Blossoming' for string quartet, 'Lotusblume' for mixed choir and 'Lotus under the moonlight' for piano and orchestra, Hosokawa pays tribute to the withering beauty of the blooming flower which maintains its magnificence only for a short time. The special instrumentation of the quartet 'Stunden-Blumen' with clarinet, violin, violoncello and piano takes up the example of Olivier Messiaen's 'Quartet for the end of time'– re-interpreted by Hosokawa as a “quartet for the origin of time”.

The instrumentations of “Landscape I-VI” range from string quartet to chamber ensemble to violin concerto. Characteristic of the 10-part 'Voyages' is the relationship between solo and accompaniment: the soloist stands for the individual, the ensemble for nature and the universe. The journey undertaken by the soloist is both a journey to himself, to his inner self, and to the heart of the sound. Both 'Voyages' contained on this CD were written for the ensemble Musikfabrik.

The duo for flute and piano was simply entitled 'Lied' by Hosokawa; in this piece, the challenge for the composer and the players probably is to generate the tonal idiom of traditional Japanese instruments by using mainly European instruments. As in 'Voyages', the part of the flute is an expression of the individual while the accompanying piano symbolises the universe.

In these recordings…Hosokawa has the advantage of working with Musikfabrik, one of the very best specialist contemporary-music ensembles, and with recording teams sensitive to the delicate textural ebbing and flowing on which his music depends.

musikFabrik isn’t an ensemble to indulge the ponderous or the self-important, and this album of Hosokawa chamber works from the past two decades is as straight and unpretentious as you’ll hear his music performed … the Messiaen homage Stunden-Blumen sounds inquisitive and alert under conductor Ilan Volkov