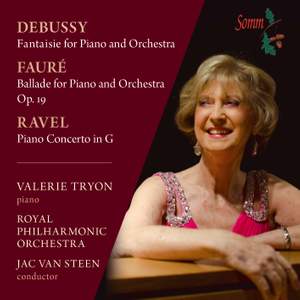 A breath of springlike air arrives with this programme of French works for piano and orchestra: subtle, sparkling and poised, the three pieces complement one another very well…Tryon's playing... — BBC Music Magazine, March 2016, 3 out of 5 stars More…

With this new release, SOMM continues its series with the Royal Philharmonic Orchestra and the remarkable pianist Valerie Tryon. Their close and enjoyable collaboration has already enriched the SOMM catalogue with two previous recordings of works by Cesar Franck, Granados and Turina (SOMM250) and Rachmaninov, Richard Strauss and Dohnanyi (SOMM253). This new release brings together three French works for piano and orchestra. Debussy was in his late twenties when he began work on his Fantaisie for piano and orchestra in October 1889. Although he made revisions to the score, Debussy forbade performance or publication of the work. The first performance was given a year and a half after his death in November 1919 and it has been rarely performed ever since. Fauré worked on his Ballade for solo piano Op. 19 in the late 1870s and was thirty-two when it was published with a dedication to Saint-Saens in 1877. A few years later he played it for Franz Liszt who may have suggested adding orchestral accompaniment which Fauré decided to do in 1881. These two works, which quite inexplicably are rarely heard, considering the quality of the music, are coupled with the popular Piano Concerto in G major by Ravel. Ravel undertook a successful four month tour of North America in 1928 appearing as soloist and conductor where he was greatly influenced by the music he heard there, particularly Negro spirituals and that newest form, jazz. He stated himself that it took two years of hard work to complete the composition eventually choosing Marguerite Long as soloist for the premiere which he conducted in January 1932.

A breath of springlike air arrives with this programme of French works for piano and orchestra: subtle, sparkling and poised, the three pieces complement one another very well…Tryon's playing offers beauty of tone, natural musicality and poetic tenderness…the Fauré dreams, the Ravel glitters.