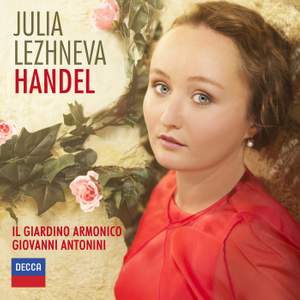 The voice itself is a staggeringly lovely instrument, possessing as it does a youthful purity that at the same time admits to an intoxicating creaminess hinting at something altogether less innocent.... — Opera, March 2016 More…

The emphasis for this album is very much on youth and prodigious talent: at 25, Julia Lezhneva is ideally suited to the soprano arias of the young Handel, who arrived in Italy from Germany as a 21 year old at the beginning of the 18th century.

She has the perfect partners in Il Giardino Armonico and Giovanni Antonini whose recordings of music from the Italian baroque are celebrated for their “fizzing virtuosity” and “exquisite cushion of sound” (The Independent). For some tracks the orchestra is led by Dmitry Sinkovsky, the extraordinary Russian violinist and one of today’s most versatile Baroque musicians.

The music encompasses the best of Handel’s operatic and religious works from his years in Florence and Rome: the operas Rodrigo and Agrippina and the oratorios Il Trionfo and La Resurrezione as well as the complete Salve Regina and soprano solo from Dixit Dominus. Best known is the radiant “Lascia la spina” from Il Trionfo and its later incarnation as “Lascia ch'io pianga” from the opera Rinald.o

The recording was made in the famously musical and historic Italian city of Cremona in the beautiful auditorium of the Museo del Violino.

The voice itself is a staggeringly lovely instrument, possessing as it does a youthful purity that at the same time admits to an intoxicating creaminess hinting at something altogether less innocent. And if you want an unforgettable example of that here try ‘Felicissima quest’alma’ from Apollo e Dafne, where apparent artlessness is undermined by Lezhneva’s weightlessly floated but subtly nuanced lines. These are indeed sounds to ravish the senses!

Lezhneva’s bell-like soprano is one of the most exciting emerging voices around, and she doesn’t disappoint in this recital of early Handel. Surely no instrumentalist’s fingers can move faster than Lezhneva’s vocal cords; she is able to somersault with the violin, hold her tone straight like the oboe, and then out-trill both of them. So there is lots to admire here – but also lots to love.

Her long-held notes in “Per dar pregio all’amor mio” are unwavering, while the fluttering coloratura passages separating them are positively birdlike; and the clarity and power of her intonation in “Disserratevi, o porte d’Averno” is quite outstanding. Lezhneva proves equally adept at secular and sacred demands

in “Disserratevi, o porte d’Averno,” the opening track of this impressive but curiously aloof recording, the young Russian soprano Julia Lezhneva runs circles around the instrumentalist with her pert and fleet coloratura.