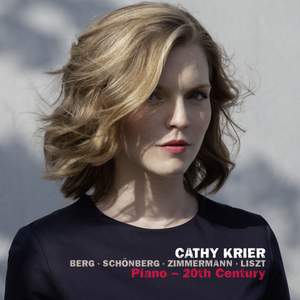 Zimmermann, B A: Small Pieces for Piano, Part I

Zimmermann, B A: Small Pieces for Piano, Part II

“The early 20th century is a period that fascinates me. The prevalent musical aesthetic was disrupted by a new generation of composers who maintained their roots in tradition, but felt a great desire to expand music’s horizons: they formed a multitude of currents and embarked on a number of different paths, all driven by the idea of transfiguring everything they had previously known.

For this disc I have chosen to retrace the path originally taken by Arnold Schoenberg. Born in Vienna in 1874, Schoenberg had an atypical career. Upon his father’s death, he had to leave school as the eldest sibling at the age of sixteen to take up a profession. As an autodidact he learned the essentials of composition by sight-reading great repertoire and by playing chamber music on the cello and the violin. Married to the sister of Alexander Zemlinsky, Schoenberg took some counterpoint lessons from that composer and soon started teaching harmony and counterpoint himself, from 1903 on.

His teaching activity remained central throughout his life, both in Europe and after having immigrated to the US. Profoundly aware of the continual evolution of Art as a historical necessity, Schoenberg introduced an important change into composition at the beginning of the 20th century. He took it over the brink into the unknown by dissolving the classical functions of harmony, then by eliminating all familiar points of melodic and thematic reference. Schoenberg’s Op. 11 is the first truly atonal work for piano ever written....”