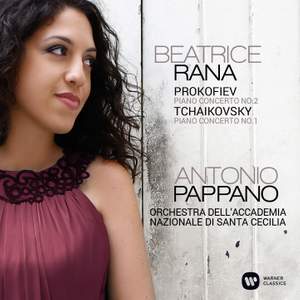 [the Prokofiev] presents formidable technical challenges, all of which are surmounted almost with nonchalance, the pianist's focus resolutely serving the score, not the mechanisms involved in... — BBC Music Magazine, February 2016, 5 out of 5 stars More…

At just 22, Beatrice Rana has already made a big splash on the international scene. Winning the 1st Prize and all special prizes at the Montreal International competition in 2011 at the age of 18, was followed in June 2013 with winning the Silver Medal and the Audience Award at the prestigious Van Cliburn competition. She is already a seasoned performer, having made her orchestral debuts with the Los Angeles Philharmonic, Detroit Symphony Orchestra, London Philharmonic Orchestra, Santa-Cecilia Orchestra, Philadelphia Orchestra, RAI Symphony Torino, Dresdner Philharmonie, Queensland Symphony Orchestra, and Filharmonica della Scala, performing in halls including the Zurich Tonhalle, Vienna Konzerthaus, Wigmore Hall, Kennedy Center, Laeiszhalle, and Walt Disney Hall.

In a testament to her musical maturity and the high quality of her playing, she is accompanied on her debut Warner Classics release by Italy’s finest orchestra, the Orchestra Dell’accademia Nazionale Di Santa Cecilia, under their Music Director Sir Antonio Pappano. This album is a tour de force, demonstrating the very best of Italian musicianship today.

[the Prokofiev] presents formidable technical challenges, all of which are surmounted almost with nonchalance, the pianist's focus resolutely serving the score, not the mechanisms involved in performing it. She has a particularly rewarding sense of rhythm, high sprung, light and incisive and entirely secure…[there is] no doubt that this is a young pianist to be watched

Rana is fierce! And not only as a pianist but as a fully developed artist of a stature that belies her tender years. You don’t want to miss her concerto debut, held aloft in inimitable style by Antonio Pappano and the Orchestra dell’Accademia Nazionale di Santa Cecilia. This is a Prokofiev Second to conjure with: shapely, subtle, nuanced, musical in every detail.

A Presto-exclusive excerpt from the second movement of the Tchaikovsky.