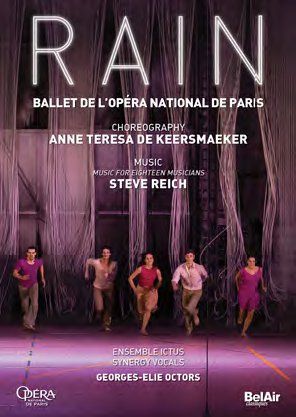 When Rain, created by the Rosas Company in 2001, entered the Paris Opera Ballet's repertoire ten years later, Director of Dance Brigitte Lefèvre brought a whole dimension of Anne Teresa De Keersmaeker’s world to the Paris Opera, giving dancers and audiences alike the possibility of undertaking a unique visual and auditory kinaesthetic experience. Since the 1980s, the choreographer has continually played a key role in the world of contemporary art, marking the emerging Flemish scene with the imprint of an original language initiated with the New York avant-garde and borne by a quest for composition in all its forms. Parallel to her intense theatrical work, she has also developed an art of minimalist purity through skilfully dynamic choreography seeking "to burst into life” in a kaleidoscope of perpetually changing forms. Set to Music for Eighteen Musicians, Steve Reich's major score composed in 1976, Rain embodies the culmination of a dance form drawing its own spatial polyphony from the mathematical principles of musical composition, a polyphony which also materialises on the floor, where the infinite trajectories of the dancers criss-cross like brightly coloured pick-up sticks. Music and dance become one until, breathless and exhausted, they discover the motifs of an exhilaratingly profound work concealed within their own inner mysteries where freedom and constraint, rigour and profusion, unity and reduction all rhyme with each other.

Rain also shares genetic links with other Rosas works. The choreographer likes to weave the discreet threads of an uninterrupted dialogue between them. Thus it is that Rain forms a diptych with Drumming, a long piece created in 1998 to another score by Steve Reich, which embraces formats at once symmetrical and yet opposing: one part all spirals, the other more angular. In the same way, in its work on breathing, conveyed by the ebb and flow of the music, Rain evokes some of the literary materials used for In Real Time, a dramatic work created in 2000 and inspired by Kirsty Gunn's novel Rain, which describes a young woman’s attempt to save her drowning brother. As such, this piece offers an intimate view of the thought mechanisms at work in Anne Teresa De Keersmaeker’s creative process. One thinks of a “rain dance” that is both a festival of torrential, life-infused motion and a timeless, incantatory quest for the golden number and its perfect proportions.