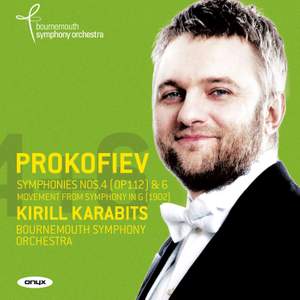 The Bournemouth Symphony Orchestra plays with conviction and virtuosity throughout the Sixth. And it's equally adept in the expanded version of the Fourth, which here seems far less structurally... — BBC Music Magazine, February 2016, More…

The last volume of the critically praised Prokofiev Symphony cycle from the Bournemouth Symphony Orchestra under its music director Kirill Karabits. Their recent performance at the BBC Proms of the 5th Symphony was described by The Independent on Sunday as "one of the hits of the summer". This final CD contains the composer’s earliest attempt at a symphony, written in 1902 at the age of just 11. The surviving movement receives its world première recording on this disc. The revised and enlarged version of 4th symphony from 1947 is coupled with the daunting and emotionally charged 6th, which to some represents the greatest of the seven symphonies. "Each of us suffers from wounds that cannot be healed" said the composer of this work to his biographer. Composed during a period of serious illness, the ‘death sentence’ or irregular heart beat depicted by the horns in the opening movement are as striking as the rhythm of Mahler’s 9th, also composed during a similar illness that would soon claim its creator.

The Bournemouth Symphony Orchestra plays with conviction and virtuosity throughout the Sixth. And it's equally adept in the expanded version of the Fourth, which here seems far less structurally discursive than in many other performances.

It is the latter symphony that appears first, and it is a crunching performance. Karabits digs deep into its violent anger and frustration, eliciting powerful swathes of darkness and deep-felt angst from an orchestra that seems to respond naturally and convincingly to the probing mind of its chief conductor. There’s a gaunt intensity in this version of the Fourth, too

There’s an admirable neutrality in Karabits’s approach, expressively judicious and sonically refined, embracing both optimism and darkness without ever going overboard.

there's much to admire in Kirill Karabits' performance. There's plenty of colour and character in the orchestral playing and tempi feel consistently right.