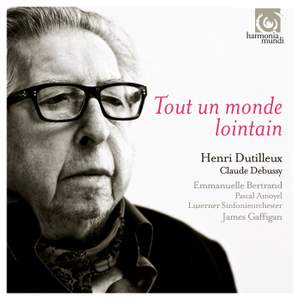 I can't do better than quote the testimony of Henri Dutilleux himself, praising 'the transparency of Emmanuelle Bertrand's sound, her rhythmic strictness, her technical perfection, the brio of... — BBC Music Magazine, January 2016, 5 out of 5 stars More…

Dutilleux, the centenary of whose birth we celebrate on 22 January 2016, made his appearance on earth just a few months before the premiere of one of Debussy’s final compositions: the Cello Sonata presented on this disc. The filiation is a natural one, for at an early age fate placed Dutilleux under the auspices of the composer of 'Pelléas' and in the vicinity of the cello, which his brother played. Alongside a new recording of the famous 'Strophes sur le nom de Sacher', Emmanuelle Bertrand joins with her partners in the Luzerner Sinfonieorchester to pay an eagerly awaited tribute to the ‘distant world’ hymned by the poems of Baudelaire and sublimely echoed by Dutilleux, the most sensitive composer of our time.

Written between 1967 and 1970 for Mstislav Rostropovich 'Tout un monde' is considered one of the most important 20th-century additions to the cello repertoire and several major cellists have recorded it. Despite the fact that the score does not state that it is a cello concerto, it has always been considered as such.

I can't do better than quote the testimony of Henri Dutilleux himself, praising 'the transparency of Emmanuelle Bertrand's sound, her rhythmic strictness, her technical perfection, the brio of her playing'. All of these qualities are displayed in abundance on this disc, every note not only in place but invested with profound feeling...A strong candidate for my Disc of 2015.

Dutilleux was Bertrand's mentor, yet her fierce independence shines through ...Dutilleux's concerto was his response to the fleeting poetic images of Charles Baudelaire, and Bertrand's playing remains infused with an idea of his 'tout un monde lontain' - 'a whole distant world'...Bertrand achieves a giddying sense of balanced perspective against those delicately spiced flavours served up by James Gaffigan's Luzerner Sinfonieorchester/

James Gaffigan and the Lucerne orchestra tread that tricky line in Dutilleux between sensuous imagery and intense technical refinement, while Emmanuelle Bertrand makes stunning sounds on her cello – now breathy and exquisite, now deep and spicy.

Gaffigan and the Lucerne orchestra tread that fine Dutilleux line between sensuality and refinement, and Emmanuelle Bertrand makes stunning sounds on her cello — now breathy, now deep and spicy. Also on the disc is a gleaming performance of Debussy’s Cello Sonata.

Bertrand delivers some extraordinarily fine playing, capturing so many details and expressive moments, with moments of fine passion as well as virtuosic skill. ..Both the orchestra under James Gaffigan and Bertrand are spot on, demonstrating fine accuracy…These are very fine performances indeed. Given that the comparative recording of the concerto on my shelves is by Rostropovich himself, this is no mean accolade.

The contemplation is often spellbinding and evocative, which Emmanuelle Bertrand and James Gaffigan conjure magically, and the recording misses no detail … completed by Debussy’s wonderful Cello Sonata (with pianist Pascal Amoyel), an enjoyably capricious account