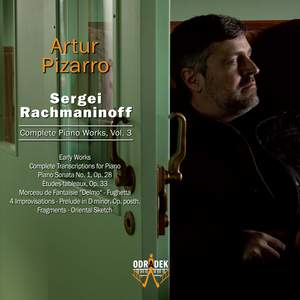 Pizarro is at his most expansive in the Sonata, delivering many passages of wonderfully reflecctive playing, especially in the central slow movement…[he] conjures up some marvellously rich sonorities…[and]... — BBC Music Magazine, November 2016, 4 out of 5 stars More…

Mussorgsky: Hopak (The Fair at Sorochyntsi)

Rimsky Korsakov: The Flight of the Bumble Bee (The Tale of Tsar Saltan)

Among the compositions on this 3-CD set are the early Suite in D minor, only recently re-discovered and given its premiere (it is thought) in 2007, the Piano Sonata No. 1, the Etudes-tableaux, op 33, Rachmaninoff’s transcriptions of other composers - from Mendelssohn and Bizet to Rimsky-Korsakov’s ‘The Flight of the Bumble Bee’ - and a host of miniature pieces.

Artur Pizarro is renowned for his performances of Rachmaninoff. A former winner of the Leeds Piano Competition (he played the Third Concerto when he won the competition in 1990), Pizarro offers his listeners a lifetime of love for, and experience with, this music which speaks, as he says, “of the endless variety of the human condition”.

A 7-CD set comprising all three volumes of Pizarro’s Rachmaninoff solo piano recordings will be released in early 2016. Another new Pizarro album is Rachmaninoff’s Piano Trio No. 2 in D minor ‘Trio élégiaque’ with violinist Christian Tetzlaff and cellist Tanja Tetzlaff for the Avi Music label (AVI8553335). In 2014, Artur Pizarro and the Italian pianist Rinaldo Zhok formed a duo for both the piano duet and two piano repertoire. Their debut disc together - of music by Antonin Dvorak - will also be released by Odradek.

Pizarro is at his most expansive in the Sonata, delivering many passages of wonderfully reflecctive playing, especially in the central slow movement…[he] conjures up some marvellously rich sonorities…[and] is particularly persuasive in the precocious epigrammatic pieces Rachmaninov composed as a teenager