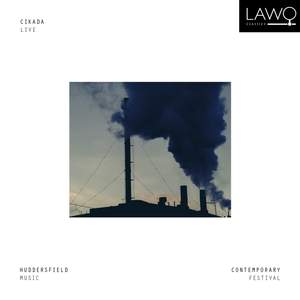 The concert on this CD recording took place in St Paul's Church, Huddersfield on 23 November 2014 as part of the Huddersfield Contemporary Music Festival.

The composers say of their works:

"The Heart’s Ear (1997) is a meditation on a fragment of a Sufi melody. Sufism could be thought of as an expression of the ecstatic dimension of Islam, perhaps quite close to Gnostic traditions in Christianity which emphasise the element of mystery or mysticism and the ideal of an ecstatic communion with the divine.

Written for the performers, "Winding Bodies: 3 Knots (2014) looks at the old Nordic tale of sailors going to sorcerors to ‘buy the wind’ tied in three knots – untying the first knot would release a breeze, the second a strong wind and the third contained a hurricane which should never be untied…"

"Some time around 2005, my interest in a musical expression that was hectic, swift and often humorous shifted to one that was slower, more introvert. This coincided with a move away from complexity towards simplicity. There was also an element of pragmatism in this transition. I began using quarter tones, and became convinced that if you gave an 'ordinary' classical musician difficult challenges in all areas simultaneously, you won't necessarily get the best result. I gradually became increasingly interested in Bruckner, who until then I'd always placed somewhere in the background. Mahler was the man for me, but once you begin to contemplate and write long pieces, it's difficult to ignore Bruckner. Gimilen first evolved as the trio Drop for flute, clarinet and piano, and was written for the Cikado Trio. The expression of the material played by the rest of the ensemble often differs from that of the trio, resulting in two quite distinct pieces."