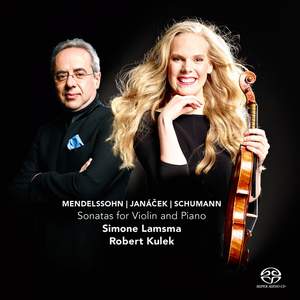 There's an exciting, on-the-edge quality to the Schumann's first movement under the fingers of Dutch violinist Simone Lamsma…sonorous of timbre, with her bow really biting the strings on those... — Gramophone Magazine, January 2016 More…

The sonatas on this disc epitomise three key stages in the history of Romanticism. Mendelssohn did more than any other composer to ensure a seamless transition between the Classicism of Haydn and Mozart and the lyrical expansiveness of a new era. His 1838 Sonata tantalises the senses, combining passion and brilliance with meticulously balanced precision. By the time his friend Schumann began work on his D minor Sonata just 13 years later, the Romantic era was in full swing, and his lifelong exploration of alternative dream worlds had begun to affect his own ability to keep a firm hold on reality. Janacek’s Sonata was composed on the eve of the First World War when the old social order and the Romantic dream were on the point of extinction, reflected in a multi-faceted score of searing emotional intensity and often startling changeability.

Dutch violinist Simone Lamsma is respected as one of classical music’s most thrilling young stars, performing with leading orchestras around the world including the Royal Concertgebouw, Cleveland and Hallé Orchestras, the Chicago, San Francisco, BBC, Frankfurt Radio, and London Symphony Orchestras, London, Royal Liverpool, Rotterdam, Netherlands Radio, and Seoul Philharmonic Orchestras, Orchestre National de France, Orchestre de la Suisse Romande and Academy of St Martin in the Fields. She enjoys a regular collaboration with Maestro Jaap van Zweden, who considers her one of the leading violinists in the world. An acclaimed recitalist, she has recently performed on tour throughout Italy, the UK, US and The Netherlands. Lamsma moved to the UK aged 11 to study at the Yehudi Menuhin School and later graduated with first class honours from London’s Royal Academy of Music.

American pianist Robert Kulek, based in the Netherlands, regularly performs with some of the foremost instrumentalists of today, including Nikolaj Znaider, Arabella Steinbacher, Daniel Mueller-Schott, and Augustin Hadelich. He has also worked with such distinguished musicians as Kyung-Wha Chung, Gil Shaham, Julia Fischer, Julian Rachlin and Alisa Weilerstein.

There's an exciting, on-the-edge quality to the Schumann's first movement under the fingers of Dutch violinist Simone Lamsma…sonorous of timbre, with her bow really biting the strings on those first double-stopped chords, it's a big, bold performance with just a hint of internal torture about it, matched perfectly by Robert Kulek on the piano