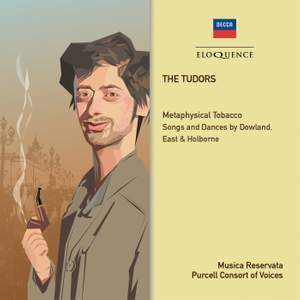 Musica Reservata’s … vitality brings a great deal of early Renaissance music to life […] All the madrigals are thoroughly enjoyable. […] The sound is excellent — Gramophone Magazine, August 1968

Poor is the Life

9. What if I never speed

12. In this trembling shadow cast

21. Away with these self-loving lads

If my complaints (arr.as "Pipers Galliard")

A collection of songs and dances by Dowland, East and Holborne performed by two of the most eminent of British early-music groups in the late-1960s: Musica Reservata and the Purcell Consort of Voices. The performance of contrapuntal vocal music, with viols doubling the voices, stems from a long European tradition and in several of the songs on this record, strings are used in this way. Part of an ongoing mini-series on Eloquence, ‘The Tudors’ presents a series of recordings of the music of this dynasty.

Musica Reservata’s … vitality brings a great deal of early Renaissance music to life […] All the madrigals are thoroughly enjoyable. […] The sound is excellent