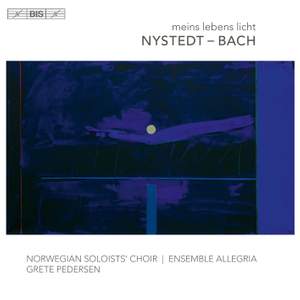 So aber Christus in euch ist

This disc is the moving homage of the Norwegian Soloists’ Choir to the man who founded it in 1950 and remained its leader for 40 years. The choral conductor and composer Knut Nystedt passed away in December 2014, at the age of 99, and the disc may to some extent be regarded as an epitaph for him. Alongside two Bach motets the programme includes four works which span almost forty years of Nystedt’s long career, from Peace I leave with you, written in 1957 and still one of the composer’s most often performed works, to Be not afraid from 1995. These two motets, as well as O Crux (1977) are a cappella compositions, while the setting from 1986 of Ave Maria is something of a rarity, for solo violin and mixed choir. The violin part is performed by Maria Angelika Carlsen, artistic leader of the Ensemble Allegria, a group of young Norwegian string players that join the choir in the two Bach motets, and also in the closing work on the disc: Immortal Bach. In this atmospheric piece, the composer has taken the first eight bars of Bach’s chorale Komm, süsser Tod, stretching the tempo of its melodies and harmonies to create an impression of timelessness and endlessness. Grete Pedersen, Nystedt's successor as artistic leader of the choir, provides the arrangement for strings and choir.