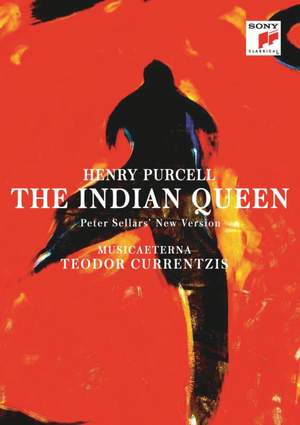 the camerawork has incredible intimacy and musical sensitivity…the MusicAeterna Choir and Orchestra of Perm Opera hug every hairpin and cleave to the exotic timbres of the continuo…sopranos Julia... — BBC Music Magazine, April 2016, 4 out of 5 stars More…

This is the second creative project bringing together conductor Teodor Currentzis and director Peter Sellars (the first being the operatic double-bill of Iolanta and Perséphone staged in Madrid in 2012), and also the first collective production of three opera companies — the Perm Opera and Ballet Theatre, the Spanish Teatro Real and the English National Opera.

The action is set in Central America. Spanish colonialists are at war with the native Mayan people. In the face of the armed forces the locals appear armed with bows and arrows, but they are mere children. Blood runs like a river. The Mayans resort to trickery – in order to infiltrate the enemy, the daughter of the Mayan chief becomes a concubine to the commander of the Spanish army. The plan brings her unexpected happiness (she falls in love with the commander and has children with him) but also tragedy (the Spanish colonialists continue the massacre of the Mayans). With nowhere to turn for help, the only hope is that the great Mayan gods will descend from the sky to the earth at the critical moment…

The scenery recreates the symbolic and colourful decoration of the Mayan tribes and the Zapatista Army — a modern national liberation movement in Mexico. The music is performed by an international ensemble of soloists, choir and the orchestra musicAeterna.

the camerawork has incredible intimacy and musical sensitivity…the MusicAeterna Choir and Orchestra of Perm Opera hug every hairpin and cleave to the exotic timbres of the continuo…sopranos Julia Bullock and Nadine Koutcher [are] outstanding as the lovesick Teculihuatzin and the homesick, horrified Dona Isabel

The human drama born of the encounter is vividly underscored by close-ups of singers, particularly Julia Bullock, superb as the Indian Queen, and Noah Stewart, compelling as Don Pedro, the most handsome and heroic of conquistadors, with whom the queen is paired in a sexually charged but ultimately lethal relationship. Nadine Koutcher sings with pure tones as Doña Isabel, a Spanish aristocrat sympathetic to the Indians, and there are excellent contributions from two countertenors, Vince Yi and Christophe Dumaux, and from the baritone Luthando Qave.