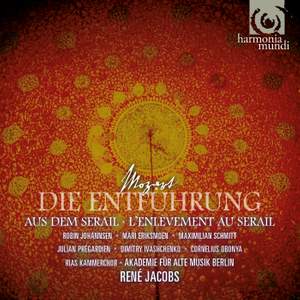 Act I: Sechster Auftritt: No. 5a Türkischer Marsch

The 1782 premiere in Vienna of 'Die Entführung aus dem Serail' was an unprecedented success. This dazzling triumph was enhanced by a libretto celebrating and counter to contemporary prejudices concerning the Ottoman Empire. Mozart gave an important place to the spoken dialogue, often severely cut, but fully restored and brought to life here by René Jacobs in the culmination of his Mozart opera recordings for harmonia mundi.

"Mari Eriksmoen was an charming and malicious Blonde with a light and elegant soprano well-suited to the fiery English maid. As Konstanze, Robin Johannssen’s soprano boasted a middle range with silvery tones. The male side of the cast was just perfect. As Pedrillo, Julian Prégardien allied both appealing singing and jubilatory acting. Maximilian Schmitt’s Belmonte impressed by his powerful and manly lyric sound and with aptly executed fioriturain “Ich baue ganz auf deine Stärke”... The strongest performance however came from Dimitry Ivaschenko. The Russian bass, combining splendid deep tone with extreme flexibility, managed to convey the comical side of his character, without reducing it to the buffoonery that often mars other interpretations.

Totally at one with the theatrical approach to the performance, the Akademie für Alte Musik Berlin followed the maestro’s contrasted tempi and played superbly…this performance at the Concertgebouw took place a few days after Mr. Jacobs recorded the work in the studio with the same team of soloists and orchestra. Without the visual support, that recording will be a very different experience but I’d certainly be keen to see if it matches up to my memories." Nicolas Nguyen, 21 September 2014, bachtrack.com

Here’s another Mozart Singspiel recreated as an audio-drama, with both René Jacobs’s intensely musical direction, orchestral playing tingling with character and detail...Dimitry Ivashchenko‘s Osmin is a true basso profundo, always droll but never overdone. Julian Pregardien’s Pedrillo is delightfully whimsical, and delectably phrased...in Mari Eriksmoen he has a bright eyed and feisty Blonde, spinning the finest lines of embellishment and ornamentation...a classic Jacobs take on Mozartian Singspiel, imaginative and user-friendly throughout.

performances of great conviction from a fine cast of singer-actors … Johannsen…is a superb Konstanze, with impeccably expressive coloratura and a beautifully silvery tone … Eriksmoen blazes away at her top Es, while Prégardien is suave, level-headed and strikingly heroic...Jacobs probes and redefines the emotional interplay between the characters in ways that are constantly fresh and insightful.

Jacobs has put so much thought into realising the opera for a home audio audience ... central to his success is the way he brings the dialogue – almost all of it – to pulsing dramatic life...The singing is mostly very good. Maximilian Schmitt brings his usual golden tone to Belmonte...it’s two thumbs up for this release.

[Jacobs's] Entführung unfolds with potent theatrical energy. It aims to entertain, to bring the situations to continuously animated life...I found it an uninterrupted pleasure to listen to the aria singing of Robin Johannsen's bright-toned, intensely involved heroine and still more to the fresh-voiced, long-phrasing, authentically musical Belmonte of Maximilian Schmitt, the bright light among German Mozart tenors.

Much of the performance has the energy and vivaciousness that is typical of Jacobs’ best work as a conductor … There are outstanding performances from Maxmilian Schmitt as a heroic-sounding Belmonte, Dimitry Ivashchenko as an imposing Osmin, nicely balanced between threat and humour, and Julian Prégardien as an exuberant Pedrillo...The whole set does sound like real music theatre

[there is a] real liveliness to the performance, aided by a youthful cast and Jacob’s pacey conducting, which draws full spice from the orientalism of the score … a set well worth investigating … it boasts a committed and homogenous cast, a sense of happy music-making and an abundance of charm