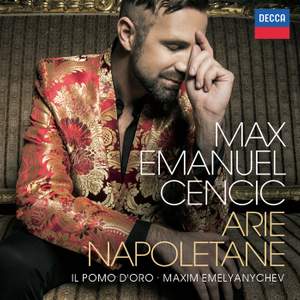 Cencic negotiates this complex emotional parabola wonderfully well. This is a great voice, dark in tone, beguiling in its liquidity and finely equalised. His coloratura flows with great ease...though... — Gramophone Magazine, December 2015 More…

Following the success of 2013’s solo album ROKOKO, Arie Napoletane is a brand new solo album for Decca’s prolific countertenor Max Emanuel Cencic. With repertoire not dissimilar to that on Cecilia Bartoli’s groundbreaking ‘Sacrificium’ album, Cencic sings arias by Porpora, Vinci and their contemporaries written for the superbly talented castrati of the day.

Focusing on the musically rich city of Naples during the Baroque period, this album, typical of Cencic’s highly-regarded musical curiosity, contains a majority of world premiere recordings – TEN works in total. Just as ROKOKO contained an extra addition in the form of Hasse’s Concerto for Mandolin, ARIE NAPOLETANE includes Auletta’s Concerto in D major for harpsichord, two violins and continuo played by the dynamic Maxim Emelyanychev.

Cencic negotiates this complex emotional parabola wonderfully well. This is a great voice, dark in tone, beguiling in its liquidity and finely equalised. His coloratura flows with great ease...though it’s the slower numbers, where the long lines are effortlessly sustained and the emotions keenly felt, that make the disc so special. Il Pomo d’Oro are on fine form, too, and Emelyanychev, volatile, sensuous and keenly intense, is impressive