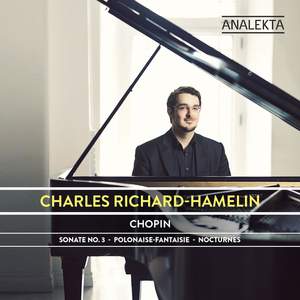 Fluent, multi-faceted and tonally seductive, he is a technician of exceptional elegance and sophistication. Part of that sophistication is his refusal to dazzle. Technique is at all times put... — BBC Music Magazine, February 2016, 4 out of 5 stars More…

Charles Richard-Hamelin is one of today’s most promising Canadian pianists. He was the the winner of the 2011 Prix d’Europe and, in 2014, he won the second prize at the Montreal International Musical Competition. As well, in October 2015, Charles will compete at the 17th International Chopin Piano Competition in Warsaw.

The works of Chopin on this recording were composed between 1843 and 1846, a period in which Chopin’s final compositional style came to the forefront. He emerged from this period even more of a perfectionist than before. The spontaneity and passionate impulses of youth gave way to a more pensive, meditative mood that in turn could express a much wider palette of emotions. Accomplished virtuosity!

Fluent, multi-faceted and tonally seductive, he is a technician of exceptional elegance and sophistication. Part of that sophistication is his refusal to dazzle. Technique is at all times put to strictly musical ends. His playing repeatedly put me in mind of Chopin's idol, Mozart, who prized the twin virtues of 'taste and feeling' and said of piano-playing that it should 'flow like oil'.