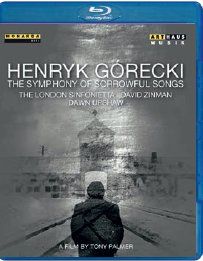 A Film by Tony Palmer

In the darkest days of the Solidarity Movement, when military rule almost destroyed democracy in Poland, the music of Henryk Górecki was the most eloquent voice of protest, a rallying cry for the oppressed, a symbol of hope. It is probably this reason which accounts for his music’s incredible popularity in what was Eastern Europe. Furtherafield, his “Third Symphony” has been a musical sensation. It was in September 1992 that the recording by the London Sinfonietta, conducted by David Zinman, with Dawn Upshaw as the solo soprano, began to enter the public’s consciousness. The symphony surged up the music charts to reach the No. 1 spot in the classical album list and, quite incredibly, reached No. 6 in the popular album chart as well. Górecki wrote the symphony in 1976 at a time when he was a ‘nonperson’ in the political sense and his music was banned in his native Katowice, some twenty minutes from Auschwitz. In 1970 he found a book about the German occupation. In the footnotes there was an example of the different messages scratched on the walls of the prison and he found one particular message from a young girl. Her words were very simple, “Mama, don’t cry.” It was these words which inspired the “Symphony of Sorrowful Songs”. This emotional, disturbing and powerful film by the award-winning director Tony Palmer includes a performance of the “Third Symphony” by The London Sinfonietta, Dawn Upshaw and David Zinman.