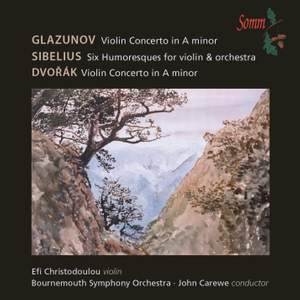 The Glazunov and Dvorak Violin Concertos are often recorded together as a pair. They both derive their inspiration from Bohemia's woods and fields whilst still remaining close to Brahmsian Viennese traditions. Adding to these, Sibelius's delightful Six Humoresques makes this a hugely enjoyable combination on CD.

This recording features Greek-born award-winning violinist Efi Christodoulou with John Carewe and the Bournemouth Symphony Orchestra in terrific form. Efi became leader of the City of Athens Symphony Orchestra following graduation from the Guildhall School of Music as pupil of Yfrah Neaman and Eugene Sarbu. Engagements frequently bring her to the United States and the UK, where she recently gave two acclaimed World Première perfomances of the Violin Concertos by Matthew Taylor and Robert Still.

Glazunov's Violin Concerto is one of his most popular works. He dedicated it to violinist Leopold Auer who gave its first performance in 1905. It was premiered in London by Auer's 14-year-old pupil Mischa Elman a year later, under Henry Wood. Lyrical and technically brilliant, it has an original, albeit unusual structure in that the slow second movement is seamlessly inserted into the middle of the first movement, ending with Glazunov's Cadenza which demands exceptional virtuosity.

Dvorak dedicated his Violin Concerto to the great virtuoso Joseph Joachim. The Concerto is one of the most abundantly melodic and loveable works in Dvorak's entire output. Its lyricism is intensified by an increasingly rhapsodic solo part in the second movement and the rondo finale, featuring a dance of characteristic cross-rhythms is a sheer celebration of Czech folk music.