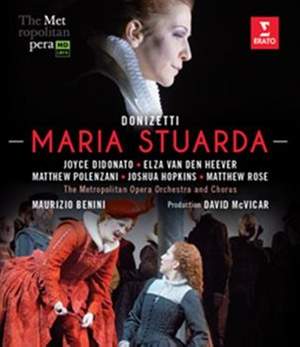 Joyce DiDonato talks to Katherine about the challenges of bringing Donizetti's Stuart queen to life.

On New Year’s Eve 2012 Joyce DiDonato became the first singer to take the title role in Donizetti’s Maria Stuarda at New York’s Metropolitan Opera. With her at its heart, the production became, in the words of Opera magazine, “a high point of the season and of the company’s performance history of bel canto operas”.

New Year’s Eve 2012 brought the first-ever performance at New York’s Metropolitan Opera of Donizetti’s Maria Stuarda, famed for its incendiary – if fictional – confrontation between Mary Stuart (Mary, Queen of Scots) and Queen Elizabeth I of England.

As the New York Times wrote: “The production stars the great American mezzo-soprano Joyce DiDonato in the title role ... [Her] performance will be pointed to as a model of singing in which all components of the art form – technique, sound, color, nuance, diction – come together in service to expression and eloquence.” The performance on this DVD took place on January 19th 2013 and was broadcast to cinemas around the world.

Based on a play by Friedrich Schiller, Maria Stuarda achieved new currency in the 1960s, and the title role has attracted such legendary singers as Joan Sutherland, Leyla Gencer, Beverley Sills and Janet Baker. “To have brought this character to life at the Metropolitan Opera for the first time in its history is an incredible privilege,” said Joyce DiDonato. “It is a role that has been inhabited by the best of the best – each star singer bringing a completely different set of strengths to her treacherous phrases and her dramatic journey. To have had the chance to put my stamp on her with such a supportive team will, I’m certain, always remain a career highlight for me.”

Opera magazine duly described DiDonato’s “glowingly-sung, fully-formed portrayal” as “a high point of the season and of the company’s performance history of bel canto operas”.

Directing the production, with its striking use of vivid colors and stark imagery, was David McVicar, and Maurizio Benini conducted a cast that also featured the imposing South African soprano Elza van den Heever, making her Met debut as – again in the words of the New York Times – “a vocally burnished and emotionally tempestuous Elizabeth ... Her voice has penetrating depth and character. She turns flights of coloratura passagework into bursts of jealousy and defiance as Elizabeth contends with the threat that Mary, a blood relative, poses to her reign in England.” As the Earl of Leicester, caught between the rival queens, American tenor Matthew Polenzani brought “melting sound and appealing vulnerability to the role”.

The magnificent final scene of the opera sees Mary preparing for her execution. “What can be said about the final 20 minutes of this opera?” asks Joyce DiDonato. “It is like being shot out of a cannon and there is no slowing down or adjusting along the way. Mary is certainly terrified and yet she manages to find a deep reservoir of determination and fortitude that enables her to climb to her death. She has finally found her peace.”

Elza van der Heever is quite brilliant as she moves from skittish to jealous, contemptuous and baleful. The three men are all good...DiDonato is an absolute knock-out...spellbinding through a perfect combination of singing and acting. Maurizio Benini conducts impeccably.

Scotland really did fire the imagination of the great bel canto composers, and though it's about as historically accurate as The Tudors, Donizetti's treatment of the final days of Mary Queen of Scots is a masterpiece of the genre, seen in here a 2013 Met production with a fine sense of local colour by the Scottish director David McVicar. Joyce DiDonato is the doomed queen, with Elza ven der Heever as her rival Elizabeth I; Maurizio Benini conducts.

One might have guessed that she could sing this demandingly florid and intensely lyrical music with crystalline Italian diction, impeccable technical security and dazzling stylistic finesse, but the fierce ardent passion she brings might surprise those who have only heard her in lighter histrionic fare. Even those with indelible memories of Janet Baker in this part will be blown away.

The mezzo might not have the optimal luxury of tone for the role but she more than compensates with the most vocally adept and dramatically detailed performance. Her coloratura is always meaningful (as well as pinpoint accurate) and her sense of line immaculate...Benini conducts idiomatically and David McVicar’s large-scale but simple production is effective.