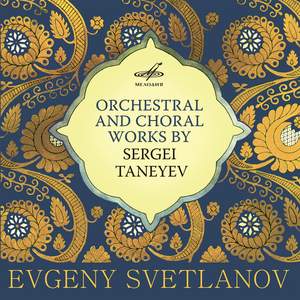 Firma Melodiya presents a collection of Sergei Taneyev’s best works in the interpretation of Evgeny Svetlanov.

“A great Russian musician, whose all efforts inspire deep respect”, musicologist Boris Asafyev wrote about Taneyev. As a composer, pianist, music theorist and educator, disciple of Pyotr Tchaikovsky and Nikolai Rubinstein, teacher of Rachmaninoff and Scriabin, professor and director of Moscow Conservatory, Taneyev made an immense contribution to the Russian music at the turn of the 20th century. His work drew on the traditions of symphonic, chamber and opera music by Tchaikovsky, enriching them with intensive polyphonic development.

The Cantata John of Damascus is Taneyev’s first composition endowed with artistic maturity (the author himself numbered it Opus 1). It is dedicated to the memory of his teacher Nikolai Rubinstein; the composition is based on the church chant Give rest with the saints, thoroughly elaborated, similarly to chorales in choral pieces by Johann Sebastian Bach.

Symphony No.4 in C minor is a masterpiece of Taneyev’s instrumental music, where the traditional structure of sonata-symphonic cycle is filled with intense dramatic movement “from the darkness to the light”.

The collection also features a refined concert suite for violin and orchestra and the symphonic entr’acte from the opera Oresteia (Temple of Apollo at Delphi) – an image of imperishable Light and Justice embodied in the image of the ancient god.

Taneyev’s compositions are recorded here with the USSR State Academic Symphony Orchestra conducted by Evgeny Svetlanov – a major interpreter of the Russian classical music. The cantata was recorded with the participation of the Big Choir of the All-Union Radio and Central TV, the concert suite features Andrey Korsakov, People’s Artiste of the Russian Soviet Federative Socialist Republic, one of the best students of Leonid Kogan.