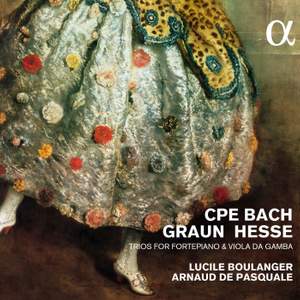 For this second recording as a duo, Lucile Boulanger and Arnaud de Pasquale propose a journey to 18th-century Germany, in the marvellous setting of the Sans Souci palace where Frederick II of Prussia had established his court.

This disc, reflecting the extraordinary conjuncture experienced by the court of Berlin under Frederick II, brings together some of the virtuosic works for viola da gamba and fortepiano by Carl Philipp Emmanuel Bach, Johann Gottlieb Graun and Ludwig Christian Hesse, attesting to the results of fruitful collaborations between the composers at that court.