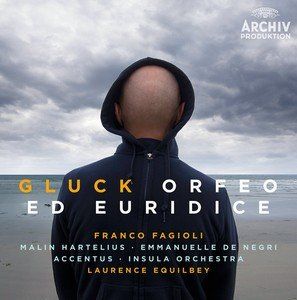 [one] cannot help but be struck here by [Fagioli's] even purity of line, the androgynous beauty of his tone and his sparing use of those baritonal lower registers…Equilbey and the Insula Orchestra... — Gramophone Magazine, October 2015 More…

This is a full recording of the original Italian version (the “Vienna version” from 1762) of Gluck’s beloved take on the Orpheus myth, Orfeo et Euridice PLUS extra music written by Gluck for later performances of his opera. It includes virtuoso arias for Fagioli and as such represents a brilliant showcase for him and a collectible item for connoisseurs.

This is Franco Fagioli’s first ever recording of a complete opera in which he sings the title role and since, the role has become one of Franco’s calling cards in recent seasons. It is known for its absolutely gorgeous music, including one of opera’s most audience-pleasing tunes, the uber-famous aria “Che farò senza Euridice”.

This version of the opera (by far the most popular one) appears for the first time ever on period instruments on DG / Archiv, hence filling a major gap in our catalogue and is a substantial project featuring one of our exciting new signings in one of his finest roles.

[one] cannot help but be struck here by [Fagioli's] even purity of line, the androgynous beauty of his tone and his sparing use of those baritonal lower registers…Equilbey and the Insula Orchestra are painstaking in their re-creation of Gluck's original sound world: period strings and brass underscore the harshness of Orfeo's isolation where the warmer sound of conventional instruments tends to console…the choral singing from Accentus [is] exceptional in its nobility and fervour.

Fagioli swoops from chesty tenor up to soprano and back again (sometimes in one breath), and he’s unafraid to fill Gluck’s lines with rich vibrato and plenty of ornamentation: this may be the closest we can get to Guadagni’s sound today (short of embarking on a mass programme of castration) but you do miss some purity and nobility...This is a big spotlight for the relatively little-known Insula Orchestra and Accentus choir, who are led by Equilbey with verve and delicacy.