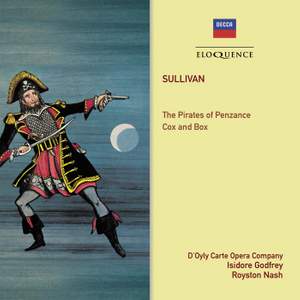 Sullivan: The Pirates of Penzance & Cox and Box

the performance is in the best D’Oyly Carte tradition. — Gramophone Magazine, August 1958 More…

Sullivan, A: The Pirates of Penzance or The Slave of Duty - Version without dialogue

Sullivan, A: The Pirates of Penzance or The Slave of Duty - Version without dialogue / Act 1

2. When Fred'Ric Was A Little Lad

4. Oh, False One, You Have Deceived Me

7. Oh, Is There Not One Maiden Breast

10. What Ought We To Do, Gentle Sisters Say?

11. How Beautifully Blue The Sky

12. Stay, We Must Not Lose Our Senses

14. I Am The Very Model Of A Modern Major-General

Sullivan, A: The Pirates of Penzance or The Slave of Duty - Version without dialogue / Act 2

21. When The Foeman Bares His Steel

23. When You Had Left Our Pirate Fold

27. Ah, Leave Me Not To Pine Alone And Desolate

31. When A Felon'S Not Engaged In His Employment

32. A Rollicking Band Of Pirates We

35. Sighing Softly To The River

38. Away With Them, And Place Them At The Bar

39. Poor Wand'Ring Ones, Though Ye Have Surely Straye

Sullivan, A: Cox and Box - Version with dialogue

We Sounded The Trumpet

Hush'D Is The Bacon On The Grid

My Master Is Punctual Always In Business

Who Are You, Sir?

The Buttercup Dwells On The Lowly Mead

This 1957 traversal of The Pirates of Penzance marked the start of the D’Oyly Carte Opera Company’s second cycle of the major Savoy Operas for Decca. It followed just eight years after the previous version, but the improvements in sound quality – in stereo for the first time, and wonderfully vivid – and performance values are vast. Conductor Isidore Godfrey revels afresh in the score, giving a sparkling and fluent account of a work he had conducted hundreds of times in the theatre (he served as the company’s Music Director for an incredible 39 years, 1929–1968). This was the start of what, for many, is a golden era of company principles. Jean Hindmarsh is one of the finest sopranos in the Carte’s history, her Mabel light and clear but with due weight. Ann Drummond-Grant, wife of conductor Godfrey, has a gloriously rich contralto and vibrant personality which brings the ‘old-maid’ role of Ruth to life particularly vividly. Matinee idol-esque tenor Thomas Round has an ideal blend of sweetness and virility for Frederic, and bass Donald Adams’s Pirate King has commanding presence and a delightfully mischievous swagger.

The set is also noteworthy for the opportunity to hear Kenneth Sandford’s Sergeant of Police. Joining the Carte shortly before this recording was made, Sandford swiftly become one of its leading lights. He made the ‘Pooh-Bah’ baritone roles his own until the company’s closure in 1982 but dropped the Sergeant in 1962 on account of its being too low (he started out his career as a tenor) – although there is little evidence of that in his assured delivery here.

When it first opened at the Opera Comique in London in April 1880, Pirates ran for a whole year, firmly establishing the reputations of Gilbert and Sullivan. Dating from five years before he first worked with Gilbert, Cox and Box was Sullivan’s first foray into the world of comic opera. Described as a ‘Triumviretta’ in One Act, the three-character piece is a setting of sometime Punch editor F.C. Burnand’s reworking of John Madison Morton’s 1847 farce. Brim full of catchy tunes and youthful joie de vivre, it tells the whimsical story of retired soldier Sergeant Bouncer and his two lodgers, Mr. Cox and Mr. Box, one of whom works at night, the other during the day. Conceived as an after-dinner entertainment with piano accompaniment, it was first performed at a private drawing room in May 1866. Following its success Sullivan expanded and orchestrated the score, but it was subsequently abridged for its first performances at the Savoy, as a curtain-raiser to Sullivan and Burnand’s The Chieftain in 1894. It was shortened even more when it entered the regular D’Oyly Carte repertory in the 1920s, where it remained as a popular prelude to the shorter Gilbert and Sullivan operas, including Pirates, until 1977 – making the present recording, from February 1978, the last time the company ever performed the piece.

the performance is in the best D’Oyly Carte tradition.