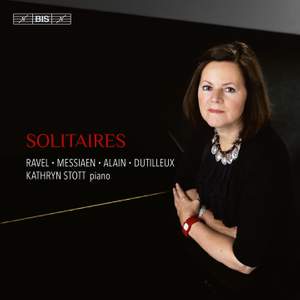 In Le tombeau de Couperin, Kathryn Stott not only pays tribute to the Classical impulses behind the work but also honours its more powerful moments…[her] fingers are well up to the virtuosic... — BBC Music Magazine, November 2015 More…

From the French piano literature of the first half of the 20th-century Kathryn Stott has selected four 'solitaires' – works that in their own distinct ways shimmer and sparkle, each occupying a special place in its composer’s output. The disc opens with Jehan Alain's brief Prelude and fugue, composed in 1935. Alain, who died at the age of 29 during the 2nd World War, is mainly remembered as a composer of organ music, and did in fact prepare a version of the fugue recorded here for that instrument. This work is followed by the only piano sonata by Henri Dutilleux, written for the composer’s wife Geneviève Joy, who also gave the first performance of the work in 1948. In Dutilleux's own words the music is 'presented above all like a vision, a dream, and when listening one should be carried away, without constraint and without worrying about analysis.’ Composed in 1914-17, the Tombeau de Couperin is Maurice Ravel's last work for piano solo – a suite inspired by the great French clavecinists of the baroque. At the same time the six movements are musical commemorations ('tombeaux'), dedicated to friends of the composer who died during the first years of the First World War. Closing the disc is Le baiser de l’Enfant-Jésus from Olivier Messiaen's monumental fresco Vingt regards sur l’Enfant-Jésus, a piece inspired by an image depicting the infant Jesus offering a kiss to St. Thérèse de Lisieux. This music, in Messiaen’s own words, ‘aims at nothing else but to be as soft as the heart of heaven...'

In Le tombeau de Couperin, Kathryn Stott not only pays tribute to the Classical impulses behind the work but also honours its more powerful moments…[her] fingers are well up to the virtuosic demands of the Prelude and Toccata, as they are to those of the works by Dutilleux and Messiaen. She is particularly attentive to dynamics and chording, and her phrasing throughout is never less than convincing.

Stott's staying power and prodigious colouristic resources help to impart unity and symphonic momentum throughout the difficult-to-sustain variation movement [of the Dutilleaux]…[in the Messaien she] takes her sweet time, allowing the trills and filigree to breathe and sparkle. Her glittering articulation of the rapid right-hand passagework differs from pianists who create a muted, disembodied effect