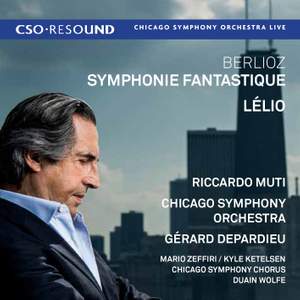 This recording features Berlioz's 'Symphonie fantastique' with its sequel 'Lelio' presented as Berlioz intended. Actor Gerard Depardieu is the narrator in 'Lelio', and Riccardo Muti and the Chicago Symphony Orchestra, as part of their 120th season, give vibrant and dynamic performances of both works.

Riccardo Muti introduces the work Berlioz viewed as his signature artistic statement: the evening-long pairing of his most famous composition, the 'Symphonie fantastique', long a staple of the Chicago orchestra’s repertoire, and its little-known sequel, Lélio, never before performed by the CSO. Berlioz wrote Lélio as the “conclusion and complement” of the earlier work’s tortured tale, a response to the symphony’s cliff-hanger ending, and, above all, a testament to the healing power of music. Together, they formed the 'Episode in the Life of an Artist', a daring mix of autobiography and fantasy. Even during Berlioz’s lifetime, 'Lélio' was rarely performed with its companion, and, only once, in a performance staged by fellow pioneer Franz Liszt in 1855, did Berlioz see his complete dramatic work presented as he envisioned it. This new recording, from live semi-staged performances, attempts to recreate the essence of Berlioz’s own concept—moving from the realm of instrumental drama in the first half, to theatre in the second, as an actor takes the stage to tell Berlioz’s tale, while a simple scrim separates reality and creative fantasy—and draws a temporary line between a modern-day Chicago audience and the daring sounds of Berlioz’s imaginary world.

throughout the performance the technical excellence of the playing is most impressive: intonation, ensemble, balance and observance of the written dynamics and phrasing. Muti also follows the sudden changing moods and variations in texture, with off-beat accents and sudden blasts from the brass. He captures the authentic Berlioz glitter and holds the long line of the idée fixe together.

This is one of the loveliest accounts available, and although hardly short on drama – the ‘March to the Scaffold’ (with repeat) is especially good – manages the perennially tricky balance that Berlioz poses between classicism and romanticism with great skill. The highly dynamic sound is an added bonus, and the playing of the Chicago orchestra is superb.