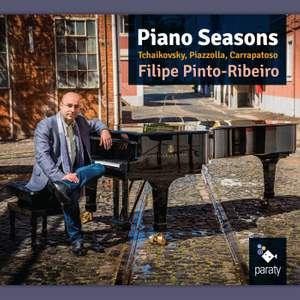 January: I. At the Fireside

March: III. Song of the Lark

Tchaikovsky: The Seasons, Op. 37b: April ('The Snowdrop')

Tchaikovsky: The Seasons, Op. 37b: May ('Starlit Nights')

July: VII. Song of the Reaper

Tchaikovsky: The Seasons, Op. 37b: September ('The Hunt')

I. Summer of Buenos Aires

Since ancient times, the theme of the seasons has fascinated and inspired the human creative spirit. This recording is a musical triptych: three cycles of seasons, three countries, three languages and worldviews of composers who addressed the theme of the seasons in three centuries, the 19th, 20th and 21st. Tchaikovsky's Opus 37, commisioned in 1875, on the twelve months of the year is followed by Piazzolla's 'Four Seasons of Buenos Aires' in a

new piano version from 2013 by Marcelo Nisinman, the Argentinian composer and bandoneon player. Originally composed by Piazzolla for his quintet they were not conceived as a suite. 'Summer' is a tango written in 1965 for the play 'Golden Hair', 'Autumn' dates from 1969 and the other two seasons were written in 1970. Also in 2013, pianist Filipe Pinto-Ribeiro challenged Eurico Carrapatoso, a fellow inhabitant of Lisbon, to compose a cycle on the theme of their city and the seasons of the year. The result was 'Four Last Seasons of Lisbon', which Carrapatoso completed in June 2014.