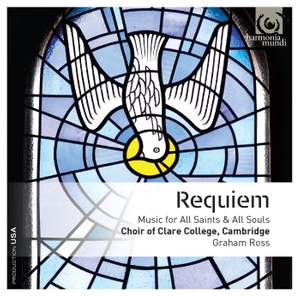 Offer, Requiem - Music for All Souls & All Saints

a marvellously sustained and thought-through performance by the Clare College students...Careful but unobtrusive detail is paid to dynamic detail...a firm, enthusiastic recommendation. — BBC Music Magazine, January 2016, 4 out of 5 stars More…

Bullock: Give us the wings of faith

Leighton: Give me the wings of faith

Edgar L. Bainton: And I saw a new heaven

Graham Ross directs The Choir of Clare College, Cambridge in a programme of English and Spanish music for the Feasts of All Saints and All Souls, culminating in Tomás Luis de Victoria’s six-part 1605 'Requiem'. It has been seen by many as a Requiem for an Age - the end of Spain's golden century, the end of Renaissance music, and indeed, the end of Victoria's own life - it was his last published work before his death in 1611.

Like it's predecessors in this Clare College, Cambridge series based on the major festivals in the Anglican calendar this volume is produced, engineered and edited by John Rutter and is accompanied by an excellent booklet note by Graham Ross.

a marvellously sustained and thought-through performance by the Clare College students...Careful but unobtrusive detail is paid to dynamic detail...a firm, enthusiastic recommendation.

In Victoria’s Officium Defunctorum the Choir of Clare College, conducted by Graham Ross, summons all its eloquence for a masterpiece of the genre.

This new anthology from that ever-improving and most elegant of mixed Oxbridge choirs, the Choir of Clare College, Cambridge … all the pieces on this disc are performed with Clare’s customary accomplishment and minute attention to musical detail, with the early-20th-century English works – larger-scale standard repertoire by Bullock, Leighton and Bainton – the most successful.

I’d be quite happy to take this mixed-voice non-professional performance to my putative Desert Island … The programme works surprisingly well as a whole and the more recent English works come over well indeed.