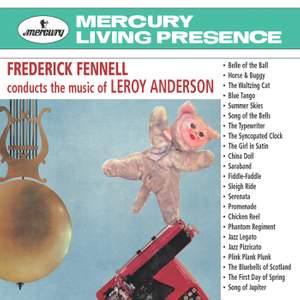 Anderson, Leroy: Belle of the Ball

Anderson, Leroy: Song of the Bells

Anderson, Leroy: The Girl in Satin

Anderson, Leroy: The Bluebells of Scotland

Frederick Fennell Conducts the Music of Leroy Anderson combines two three-track stereo albums made of Anderson's music by Fennell in 1956 and 1964, and as they have been re-engineered in the 90s, with the help of the original production team, one would never guess that these recordings date back to March 1958. It is a generous selection of 23 tracks and including such rarities as Horse & Buggy and Chicken Reel.