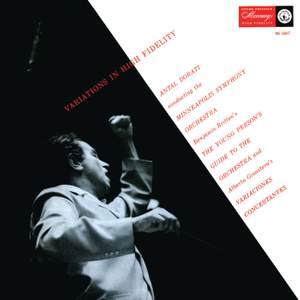 11. Recapitulation of the Theme for Double Bass & Harp

Ginastera’s Variaciones concertantes and Britten’s Young Person’s Guide to the Orchestra were recorded on the stage of the Northrop Auditorium, Minneapolis, on November 20, 1954. This music was recorded onto a Fairchild full-track quarter-inch tape machine running at 15 inches per second using a single Neumann U-47 microphone. The microphone was maintained in constant position throughout — about 15 feet above and slightly behind the conductor’s head — and the orchestra was seated in normal concert performance set-up. The first-generation master tape was not available for CD remastering, but a good-quality dub tape was present in the archive and was used. Originally released as MG50047.