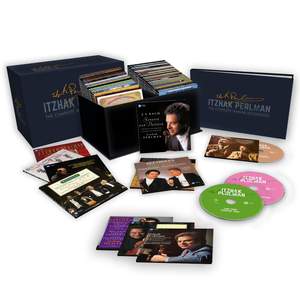 Smetana: From the Homeland - two duos for violin and piano

Kreisler: Songs my Mother taught me (after Dvořák)

Kreisler: Tempo di menuetto (in the style of Pugnani)

Kreisler: Fugue in A (after Tartini)

Kreisler: Preghiera in the style of Martini

Kreisler: Mazurka in A minor (after Chopin)

Tartini: Variations on a Theme of Corelli

Paganini: Sonata for Violin & Guitar No.12 in D major

Wieniawski: Polonaise brilliante No. 2 in A major, Op. 21

Foster, S: I Dream of Jeanie with the Light Brown Hair

Paradies: Toccata in A

Poulenc: Presto in B flat major

Ravel: Valses nobles et sentimentales No. 7 in A minor

Previn: A Different Kind of Blues

Previn: It's a Breeze

Prokofiev: The Love for Three Oranges: Suite Op. 33b: March

Gershwin: It Ain't Necessarily So (from Porgy and Bess)

Glazunov: Mazurka-Oberek in D major for violin and orchestra

Rimsky Korsakov: Concert Phantasy on Russian themes for Violin and Orchestra in B minor, Op. 33

To celebrate Perlman’s landmark birthday, in September 2015 Warner Classics is releasing Itzhak Perlman — The Complete Warner Recordings, a fifty-nine-album set which contains all the recordings he made for EMI Classics (his principal label) and also for Teldec — including some previously unreleased recordings. The Deluxe Edition covers every aspect of Perlman’s art, containing concertos — both the “essential” concertos and a number of more rarely-heard works, including Perlman’s own commissions from living composers — other pieces for violin and orchestra, chamber music, recital and crossover repertoire (including jazz, ragtime and klezmer), and even a disc that focuses on Perlman as narrator and (briefly) opera singer.

No other label is in a position to assemble such a comprehensive, multi-faceted Perlman tribute. The recordings see the star violinist collaborating with an array of superlative musicians, including Martha Argerich, Vladimir Ashkenazy, Daniel Barenboim, Plácido Domingo, Carlo Maria Giulini, Bernard Haitink, Lynn Harrell, Yo-Yo Ma, Zubin Mehta, Seiji Ozawa, André Previn and Pinchas Zukerman. All fifty-nine albums in the Edition will also be released individually. The recordings from the analogue era have been carefully remastered in 24-bit/96kHz sound at Abbey Road Studios.

The format and presentation of each album is true to the original LP and CD release: the couplings of musical works have been retained and the design reflects the original jacket. New notes on the music and the performances have been written by one of France’s best-known experts on violinists and violin-playing, Jean-Michel Molkhou. As for Callas Remastered, Itzhak Perlman — The Complete Warner Recordings will contain a beautifully produced hardback book. Running to ninety-six pages, it will contain a new interview with Itzhak Perlman (written by Jean- Michel Molkhou), an essay on his life and career and personal tributes from distinguished and varied fellow musicians, including Vladimir Ashkenazy, Daniel Barenboim, Renaud Capuçon, Ivry Gitlis, Gidon Kremer, Yo-Yo Ma, Vadim Repin and Maxim Vengerov. It will also feature a wealth of photographs, many of them from private collections and never before published.